Comala Document Management introduces the concept of "workflow tasks". They have similar functionality to Confluence tasks, but they don't clutter up the content. 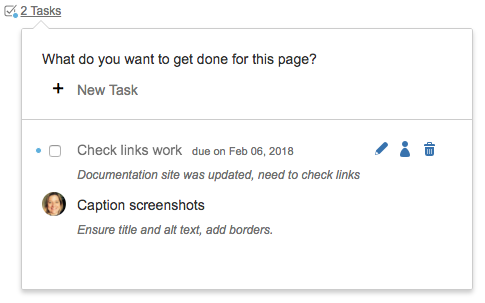 Tasks can be created by users, but only in States which are taskable.

Tasks can also be created by the workflow itself, using the {task} macro.

In Page Mode be aware that adding the {task} macro to the current state of a workflow will often give unexpected results. That's because the {task} macro only works when the state is entered from another state. If you edit the {task} macro in to the state you are currently in it won't add any tasks; you would need to transition away from that state first, and then back in to it, for the tasks to be added.

Tip: You can use the Administrator state override to quickly transition between states.

The {complete-task} macro can be used in an Event Trigger to automatically complete a specific task.

In this example, transitioning to the Published state will automatically complete the task added by the Macro state, if it is not already completed. If it is already completed, the {complete-task} macro will just ignore it.

Note: Depending on the event which triggered the action, the Activity Report - Content may show the user as being Comala Document Management.

The {state} macro can automatically transition to another state when all tasks have been completed.

In this example, as soon as all tasks are completed in the Macro state the workflow will transition to the Published state.

When using this approach, ensure that the state which defines the completed parameter adds a task, otherwise there might not be any tasks to complete which would leave no way of exiting that state. An alternate would be to include the {state-selection} macro so the user can manually transition out of the state.

You can make the presence of incomplete tasks disable the Approve and Reject buttons in a review by using Conditions and Value References on the {approval} macro.

Note: The {state-selection} and {trigger} macros can be disabled the same way.

By default, task assignees and page watchers will receive notifications about tasks.

Tasks generate a numer of Events, which can be used to Trigger Actions.