Documentation for other versions of Comala Workflows are available too.

This space is no longer being updated.

This tutorial helps you to learn how to create workflows using the workflow markup. If you are evaluating the plugin, use the Workflow templates provided with plugin.

This tutorial focuses on a central need of many Content Management Scenarios: that content should be visible to only those people involved in the workflow until that content has been seen and approved by relevant parties.

The example below is based on the Editor and staff approval workflow already provided as a workflow template.

We start by defining four "states" that any given page can be in: Draft, Ready, Reviewed and Published.

These are all "transitions"; they define how the work flows between those states. In addition to the forward flows, there are some that lead backwards:

You have 2 options to create the new workflow:

Like most things in Confluence, a workflow is defined using Confluence Macros.

A workflow is defined in a definition page using the {workflow} macro. It contains a collection of states and approvals. Later, we will add triggers .

The {state} macro defines the states.

The states include the taskable=true parameters because we created the workflow as an ad hoc workflow; however, we are going to override the entire workflow.

We need to define the following transitions:

When the system reaches the Published state, we apply the Final Marker to the version of the page. Usually non-contributors only see final versions.

You can save the workflow now.

When you save the workflow, the {workflow} macro line adds a couple of parameters such as name and space.

Let's try out the workflow.

The page is shown in its initial Draft state:

From there you can submit the page: 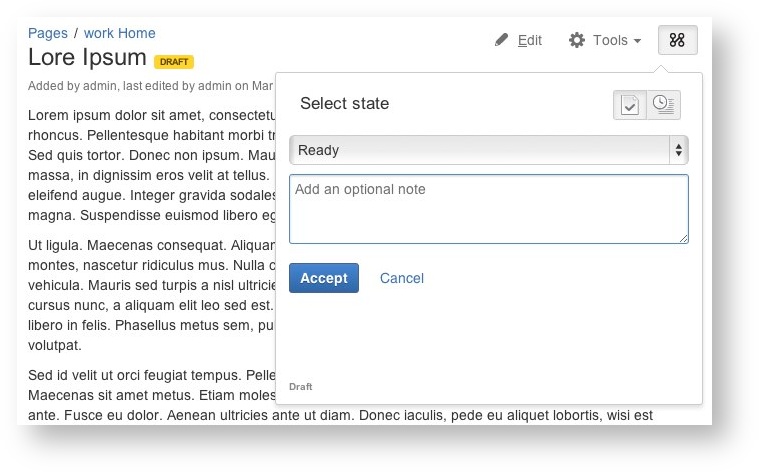 You can now transition the page towards the Published state with each approval. You can view the current state by hovering over the Page activity link: 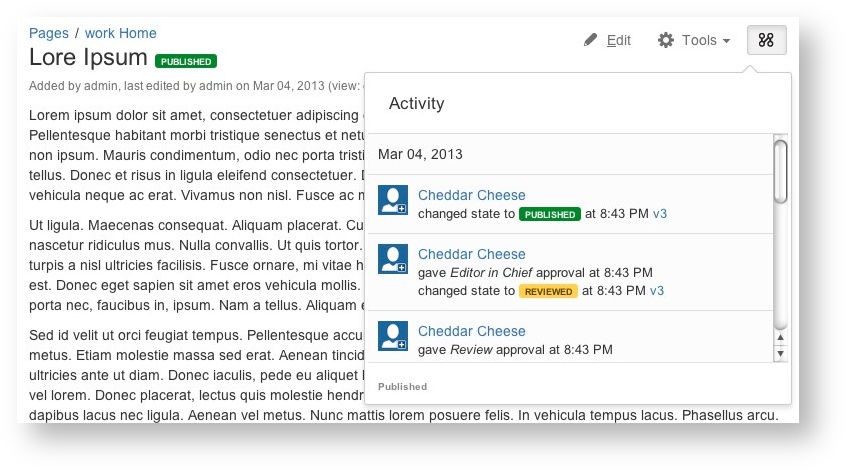 Now continue to: Lesson 2 - Specifying who can action the approvals