Install through the plugin repository.

Upgrade for Existing Users - Prior to 2.0

Please note the 2.0 release of Ad hoc Publishing plugin is a paid upgrade.  You will need to purchase a license before using this version.

Spaces that are already configured for publishing will not have single page publishing enabled by default, so if you are integrating with Ad hoc Workflows you don't have to worry about your workflow steps being bypassed.

We have introduced some new features to improve the experience using the plugin on its own, revamped the UI and provided updates for publishing as part of your workflow through the Ad hoc Workflows plugin.

In converting to a commercial model for this plugin, Comalatech commits to devoting the developer time necessary to maintain compatibility with each new release of Confluence, addressing long-standing issues and developing new features. 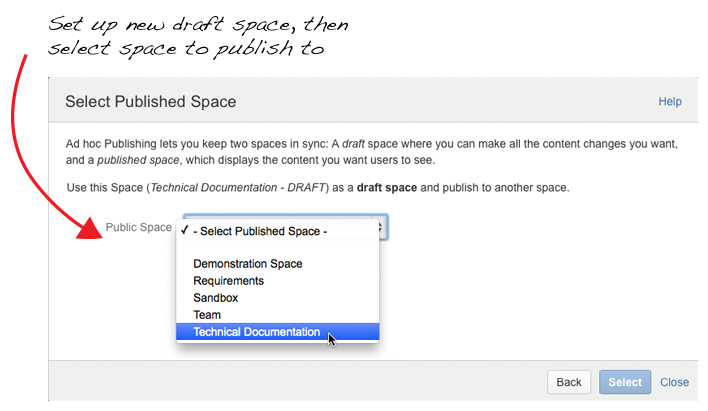 It is now possible to publish one page at a time from your draft space to your published space directly from the draft page.  Publishing previously only allowed for the whole space to be published at once in its entirety, unless you had Comalatech's Ad hoc Workflows.

Integration with Ad hoc Workflows is still supported: this allows you to specify that a page must go through an approval or sign-off process before being published.

We've added a new lozenge that will appear alongside the page title. It states whether a page is currently published, or has unpublished changes.  It is only visible to users who can edit the page on the draft space. This way authors know the current state of the page no matter which version they are viewing.

We have also taken the hassle out of setting up a link between the draft space and the published space.  While previously possible using custom space themes coupled with using various macros, a link to the corresponding space just displayed by default. Like the page status lozenge, it is only visible to users who can edit the draft version of a page. 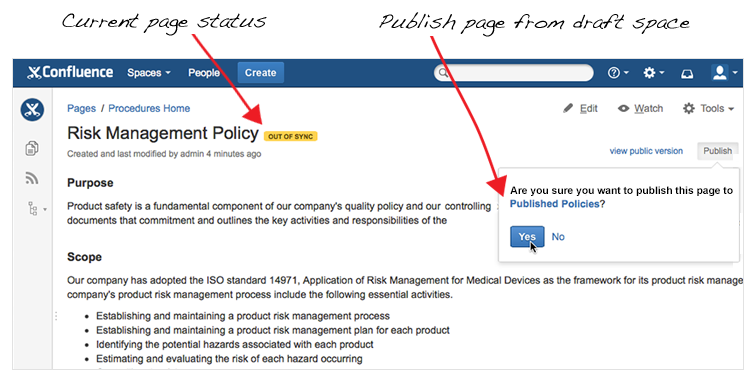 In this 2.0 release we revamped the way the single page publishing works, so page renaming now works as you would expect it to. A (now past) long-standing issue with Publishing was that renamed pages were not correctly updated on the published space, such that a rename would leave both an old page and create a new, renamed, one. This is no longer the case.

(For existing spaces, this feature will be available after you have published a page the first time using 2.0 release.)